Today was an interesting day and totally a Bahamas day. We are now fitting in with the locals here in Spanish Wells as we have been here for five days. Spanish Wells is a small town that supplies a ton of lobster to Red Lobster, so it is a fishing town that is industriuos and everyone is connected to everyone (chances are their last name is 'Pinder').

We decided that we would travel the island of Eleuthera as today was going to be windy and a great day to be on land. So we spoke to the ferry driver yesterday and told him we would take his ferry over to Eleuthera, however we wanted a car to rent on the other side. He called his boss who co-ordinated the whole rental. We teased him that we didn't really care what the vehicle was, as long as it was blue. Well guess what, we had a blue 2007 Dodge Caravan waiting for us after our 8 minute ferry ride.

If you are going to rent a vehicle, don't worry about doing a walk around (that is only a Budget or Avis thing). Here all you do is pay the $80, fill out the duplicate form and you are now renting…they don't check if you have a license as that doesn't seem to matter.


The vehicle was made with air bags, however someone decided that that type of technology is not required or even warranted. In fact, the steering wheel had been cut open, the horn and air bag removed and then the wound was healed with some epoxy. We aren't sure if there was a recall from Chrysler or if the car was in an accident and the air bag went off and it was easier to just seal the wound.

As we drove, there was a constant pulling to the left…we weren't sure if there was a problem with the tires, the ball joints, tie-rods or something else, however we did notice the vehicle had 80% of the nuts on the front left tire and more importantly, there were two OEM nuts that were on the rim. Not bad to have 19 of 20 nuts on all four wheels - that is 95% of them! 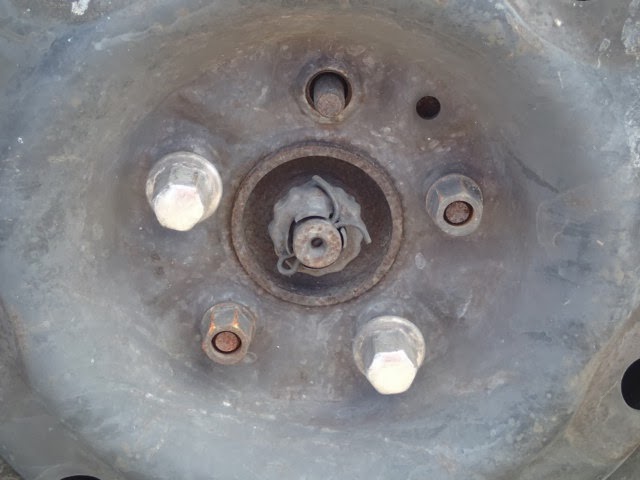 We also noticed that the Caravan was probably imported from the land of snow and ice as the two front tires were actually snow tires…this is NOT a joke! The Blizzak tires held the road well when we traveled all over the place - the traction was excellent on sand, water and of course palm trees.


Our first trip was to Preacher's Caves. These caves were the home to the natives as well as the English who had their ship break apart at Devil's Backbone. They landed in 1647 as they had left the US for religious freedoms. The way to the Caves is somewhat difficult to find, so we had to do some off roading and the tires and wheel nuts handled well.

After leaving the caves, we headed south (past the rental company), however now that we were driving, we kept to the posted speed limits. As we headed south, we crossed the Glass Window which has the dark blue Atlantic and the gorgeous blues of the Exuma Banks connect.

From here we kept heading south and started to get a little parched. As we have been testing different daiquiris throughout our trip, we had to stop at Two Brothers. They are known for awesome daiquiri's and we needed to give them a try.

We then visited Lee's Café in James Cistern. We had a great lunch of fried chicken and home made mashed potatoes. The meal was awesome and to add to the great meal, we learned that our cook had no known communicable diseases.

We then drove south to Governor's Harbour, Palmetto Point, Savannah Sound, Tarpum Bay and ended up in Rock Sound. There is a really cool Blue Hole in Rock Sound that is similar to the one we saw at Hoffman's Cay, however this one had fish in it. You aren't supposed to feed the fish, however people that were there just before us fed them some plain Ruffles Chips (you could tell as they had the ridges on them).

As it was getting later in the day, we needed to turn around and start back north again. However, before we did that, we decided we needed to go check out where the "Club Med" was..you see, it was destroyed in a hurricane several years ago, but we wanted to see what was left. As we headed down one sketchy road, we go to a smaller road that eventually turned into a single sandy road. This is where Club Med used to be…all that is left is a foundation and a sandy road.

We headed back, returned the "vehicle" to the rental company. We were driven back to the dock and at 65mph, I decided to put my seat belt on…(it was the only one that worked - all others were broken). The max speed our driver had that thing going was 76mph…and again, we didn't have all the nuts on the wheels, it pulled to the left, the air bag was non- existent and there was a huge dent in the bumper (non of the damage was from us!)

After we got back to the boat, we decided that we had an exciting day, and that we would head to Bubbas. When was the last time you purchased your food from a school bus, headed into their house to purchase alcohol (and hit the washroom) and then sit back down to eat?

The food was pretty good - burgers, hot dogs and even Chinese food tonight!

After settling up at Bubba's, I asked if they knew a friend of ours from Palm Cay (the dock master). You see, Brooks lived in Spanish Wells and he told us everyone would know him…well guess what…after mentioning his name, Bubbas had a frozen sheep tongue for Brooks…as we were going to see him tomorrow, we decided that we would take it to him!