Today, it was cold. Real cold.

So, today we were in Lignumvitae Key. It’s an interesting place, but I don’t like explaining/describing things. Here’s a wikipedia article instead.

While we were in Lignumvitae Key, it was cold. None of this weak little 18-degree-maybe-put-on-a-sweater-if-you-feel-like-it-but-you-don’t-REALLY-have-to-and-you’ll-probably-be-fine cold, but actual teeth chattering, snow blizzarding (serious blizzard, like worst of the year), wear a parka or freeze to death cold. The cold that scares you. The cold that makes you wonder why people decided to settle in North America in the first place cold.

Not where we were, of course. We were plenty warm. We even jumped into the ocean to cool off. (While doing so, dad kicked a fish [he says] of a size that increases every time he tells the story [we’re at about a 400 pounder at this point], but that’s a story for a different time). It was that hot.

No, wonderful readers, it was our friends back home who almost froze to death in what was probably the worst storm of the year. We were sweating. Which is, of course, the reason we took this trip in the first place. That and relaxing. We did that too. We went fishing, we laid around doing nothing in the December heat, I read most of a Stephen King book (not as scary as World War Z that zombie book whose title I can't mention because of copyright, but still freaky at some points [read "Under The Weather" {no I'm not worried about copyright here. This is a critique. It is allowed under free speech and the DMCA}, that is a very freaky story]). That was a very large, three layer deep, parenthetical labyrinth. 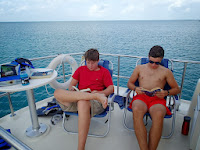 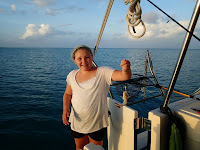 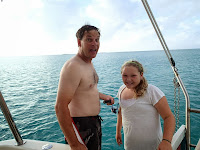 Where was I? Oh right, I read most of a Stephen King book, dad fished (but failed to catch the elusive now-575-pound fish that he had kicked earlier), and we took a tour of a state park. We saw completely unimpressive lignum vitae trees (which you may have read about if you followed the above hyperlink) and Gumbo Limbo trees (nicknamed the Tourist Tree because it's red and peels) and poison trees, which are members of the poison ivy tree, but are 4 or 5 times worse (which scared us) and mosquitos.


I had forgotten my hatred of that particular species, but the deep inner rage that I had been harbouring since July was reawakened by those awful biting insects. The one thing I miss about winter is no skeeters (coincidentally, skeeter is the name of one of the characters in the Stephen King book. Trades the devil blood pressure medication in exchange for a cure for cancer).