He's sitting at the bottom of the ocean. He's carved into a pedestal, just in case you're wondering why the second coming hasn't happened yet.

Not the real Jesus of course, but a statue. And not technically a statue of Jesus, but a statue modelled after a statue of Jesus. You see, once upon a time a statue was.... I'm sorry. I'm not too familiar with the story. Luckily, wikipedia is. For those who are not familiar with my writing (everyone except schoolteachers), I use wikipedia a lot. Got zeroes on two separate essays because of it. But enough about me, here's the gist of the wikipedia article:

So, the Christ of the Abyss is a 2.5 meter high bronze statue 17 meters below the Mediterranean Sea. It is placed in the spot at which Dario Gonzatti, the first Italian SCUBA diver died. There are multiple casts of the statue, one of which is just off Key Largo in the United States. This is the cast that we saw.

We were snorkelling at the site of the statue. It took us a couple of minutes to find it, after which we had fun taking pictures with it. See below. After pictures, we snorkelled around the reef for a bit, saw some coral, a few barracudas (which look very mean and would probably eat your hand if they could. Luckily they didn't. But we were still scared), and even jellyfish. We weren't stung. 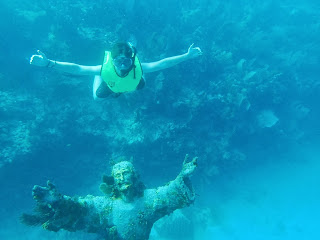 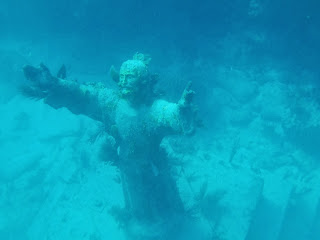 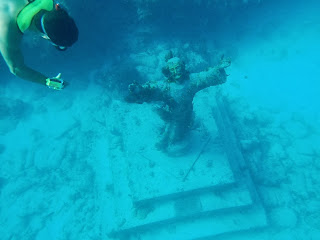 After getting out of the water, we watched a wedding. Not like, we went back to shore, got in a car, drove to a church, and watched a wedding, but right there. On the ocean. Two people (probably avid scuba divers) got married underwater at the Christ of the Abyss statue in full scuba gear, him in a wetsuit designed like a tux, and her in a waterproof white dress. So that was interesting. I wonder what the hand signal for 'I do' is (scuba divers pretty much exclusively communicate with hand signals)…

Here is a barracuda (perhaps God of the fish?) that was checking us out….. 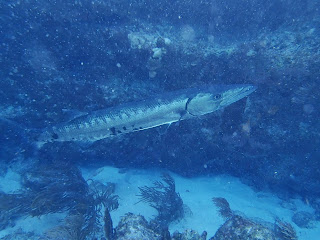 And here I am, just doing some diving… 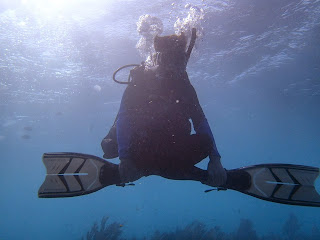