We walked for two minutes from "SeaMorr" over to "Sailors Choice" for a day of fishing. The deal is you pay cash and they take you out with 20 other fishing people.

We hadn't left the dock yet, however we learned that yelling "Fish On" was really funny as the two crew (Kenny & Josh) would run around the boat with their fishing net.  It was kind of "never cry wolf", however it was funny while it lasted.

The first person to yell "Fish On!" was Chopper. As her squid descended to the 100' depths, the line went taught and she knew there was a fish that was going to see the light of day. After a couple "Fish Off's" a Trigger fish was on the boat.
Next was Corey to yell "Fish On" and Josh came with the net. The fish was thrown back as it wasn't all that large or tasty.

Aaron was looking for fish, but it seemed like the fish weren't looking for him. He tried and tried, however the fish just weren't interested in whatever he was using for bait. 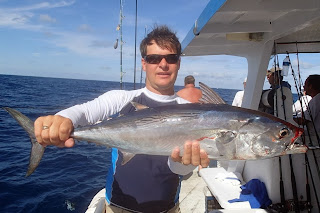