Aaron's fact of the day: Skittle packages appear grey while 100 feet under the ocean.

Yes, ladies and gentlemen this is the noise that we spent several hours of our wondrous stay in Key Largo listening to exclusively. Not because we were watching  a 6 hour 19 minute Star Wars marathon  as the 4/5 members of our family say that taking an entire day to watch movies, even such modern classics as Star Wars, is a waste of time.

No, good readers, this is the noise that we heard because that is the only noise that reaches your ears while you are scuba diving. Yes, I do repeat, scuba diving. Wearing nothing but technologically advanced scuba gear and a wetsuit, four of us (dad has ear issues and has a doctor's note disallowing him to dive) braved the shallow warm waters (30 feet and 79°F, #TheGoodLife) of the Florida Keys with several thousand psi of pressure strapped to our backs, all with the intention of seeing cool fish.

Back in January, Corey, Mom and myself became scuba certified, but had done nothing in the meantime. So, after taking a refresher course, we felt confident in our ability to scuba (I know that scuba is technically a noun [well, really technically, it is an acronym {self contained underwater breathing apparatus}] but for the remainder of this blog post, assume that my grammar is perfection). Katie also became certified here. And because there isn't much to do here, we dove almost every day, and often twice a day. 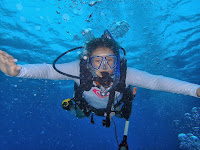 Most of the dives were to coral reefs, where we saw lobsters and parrotfish and sharks (oh my!), but there were also some different dives. For example, we went on a night dive, a deep dive to 100 ft (which is where we learned about skittles and their colour insecurity), and a wreck dive. Sunken ships are cool. No dead people though so that sucked was good. 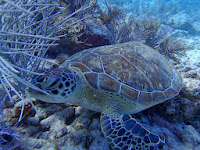 This is supposed to be a concluding paragraph, but I don't really think that an ongoing blog needs multiple conclusions. We might do one big concluding post in a few months, but until then, I'll just say bye. Bye!
Posted by Unknown at 7:51 PM