Cruising the "inside" down the Atlantic Intercostal Waterway has been beautiful.  The waters are usually calm, current is confusing but doesn't usually matter, and the scenery amazing gradually changing from rivers to marshes.

After a while though it does start to look all very similar.  Excitement for us on these trips between ports is a funny conversation heard on the the VHF radio, pondering the lives of some of the boats going by, or dolphin spotting (sometimes known as a "suck in" according to Katie)  We have been lucky to see dolphins every day we have cruising on the ICW since being south of  North Carolina.  Dolphins,  I have decided though,  are very camera shy, so even when they are swimming right beside the boat in our wake, looking up at us as they jump and spin, they dive deep when the camera comes out.  Out of at least 100 "splash" pictures of plain water or a piece of fin, this is the best I could do.  You will have to trust us, they are awesome to watch.

A new activity for us lately has been finding a new use for the cheerios which are a bit stale being open in the salt air for a few days….. see if you can spot the cheerio - the birds are amazing at finding them! 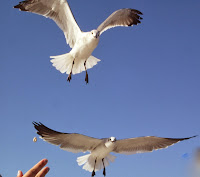 So after a few days of following these narrow channels on the ICW, marked with something called the Magenta Line which you are supposed to be able to almost blindly follow to stay in the deepest water (along with all the other boats doing the same thing) we decided to be daring, add some excitement to the day,  and leave the marked path, no longer following On Course,  towards our anchorage for the night.   It was a small river named Mud River and the chart showed all should be fine in terms of water depth, with maybe a short little bit at the end which could be kinda sketchy, but the tide was coming up - surely we could avoid hitting bottom,  we could glide across the shallow part if we needed.

Suffice it to say we celebrated a beautiful sunset in the middle of a beautiful river all by ourselves.