On December 26, 1860, six days after South Carolina declared its secession, U.S. Army Major Robert Anderson abandoned the indefensible Fort Moultrie, spiking its large guns, burning its gun carriages, and taking its smaller canon with him to be trained on the city. He secretly relocated companies E and H (127 men, 13 of them musicians) of the 1st U.S. Artillery to Fort Sumter on his own initiative, without orders from Washington. He thought that providing a stronger defense would delay an attack by South Carolina militia. 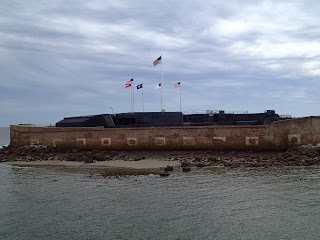 The fort was not yet complete at the time and fewer than half of the cannon that should have been available were in place, due to military downsizing by President James Buchanan. Over the next few months repeated calls for evacuation of Fort Sumter from the government of South Carolina and then from Confederate Brigadier General P. G. T. Beauregardwere ignored. Union attempts to resupply and reinforce the garrison were repulsed on January 9, 1861 when the first shots of the war, fired by cadets from the Citadel, prevented the steamer Star of the West, hired to transport troops and supplies to Fort Sumter, from completing the task. After realizing that Anderson's command would run out of food by April 15, 1861, President Lincoln ordered a fleet of ships, under the command of Gustavus V. Fox, to attempt entry into Charleston Harbor and supply Fort Sumter. The ships assigned were the steam sloop-of-war USS Pawnee, steam sloop-of-war USS Powhatan, transporting motorized launches and about 300 sailors (secretly removed from the Charleston fleet to join in the forced reinforcement of Fort Pickens, Pensacola, FL), armed screw steamer USS Pocahontas, Revenue CutterUSRC Harriet Lane, steamer Baltic transporting about 200 troops, composed of companies C and D of the 2nd U.S. Artillery, and three hired tug boats with added protection against small arms fire to be used to tow troop and supply barges directly to Fort Sumter. By April 6, 1861 the first ships began to set sail for their rendezvous off the Charleston Bar. The first to arrive was the Harriet Lane, before midnight of April 11, 1861.
Posted by Unknown at 4:58 PM