The day started early....or would have been early if Corey's alarm battery didn't conveniently die through the night.... We thought we would try to beat the nastier weather predicted to come later in the day.  Unfortunately it  didn't quite work out that way and we spent a couple of hours going down (or bobbing up and down in)  the Chesapeake in some very big waves and wind - the kind where everything in the cabin decides it wants to meet in the middle!  Corey and Katie did a great job protecting the surprise cupcakes though,  turns out bathtubs can be very protective !  The Waterways Guide which described this part of the Bay as like a "washing machine"  when the winds are from the North, certainly had it right!  Once we turned up the Potomac however things calmed down and the rest of the ride to Colonial Beach VA was uneventful.  We arrived in the mid afternoon and had a cupcake birthday lunch, saw the highlights of "Sharknato" ( which some of us had missed on the first viewing of it, and really is too funny to miss)  then went off to explore the town. 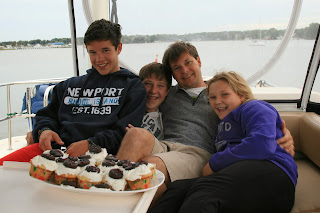 We ran into the very nice marina owner Bill Bowman at the Lighthouse Restaurant and he joined us for dinner.  The advertise themselves as the best sunsets in town and we were not disappointed !! 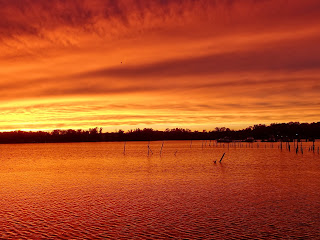 Our food silo widened even more with a dessert of delicious homemake coconut ice-cream. The candle was a nice birthday touch ! 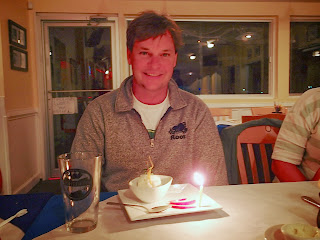