The Range is HOT! 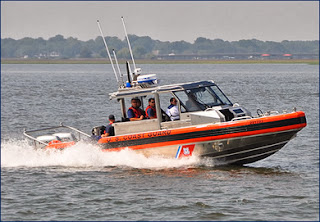 We headed out from our marina and we headed north on the Potomac River (the same one that George Washington crossed), however we had more excitement than what GW had. We had a US Coast Guard boat come and visit us as we headed north.

Here is the radio transmission...

We were instructed to change course as the firing range was firing live ammunition into the Potomac. The range is actually part of the course as you head north on the Potomac River! We basically crossed at right angles over to the eastern shore, then head north and then we were able to join back into the channel again....we didn't see anyone shooting and we made it through without issue!