After a sleepless night of "washing machine of death" where the waves were smacking our bow from  both sides and gyrating the boat from all angles, we decided we would take a leisurely trip westward along the inside of Long Island Sound. But first, we needed to get the boat out of our slip and into the 3 foot waves and the 25mph winds. We knew that once we were out from Shinnecock Bay and the inlet, the waves would subside.


After traveling approximately a mile, the waves subsided as did our forward travel. Kim wanted a beach day and wanted to basically slow things down, so we decided we would take a break for the next twelve hours. (And as a benefit we got to meet a mullet and 500HP of Mercury Power). SeaMorr decided to take a breather as well and wanted to feel the gentle moist soothing sand along her hull....we called it a "Spa Day for a SeaMorr".

As we headed westbound, we met another boat that was heading easterly. We slowed for a slow passage and found ourselves stuck in some sand. As the tide was dropping, SeaMorr was enjoying less and less water and more and more sand. For the next ten hours, we had a perfect view of a great house. We were able to watch them have breakfast, cut their lawn, wash their car, do their laundry, eat lunch, play tennis, BBQ some dinner and they seemed to have a great day moving about their house. 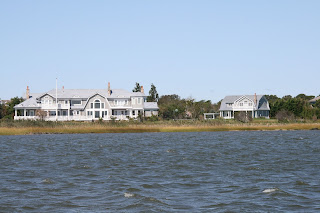 The call went into BoatUS and they responded as soon as they finished with another boat that was stuck in the mud. We deployed an anchor from the stern, hoping that the current would actually move SeaMorr back into deeper water, unfortunately with the tide dropping and it wasn't of any help. At this point, there was 48" of water on our port side (left) side and 43" of water on our starboard (right) side and we need 42" of water under the hull, so that told us the bow was stuck.

BoatUS tied a bridle around the bow of SeaMorr and encourage her off her perch, however that was unsuccessful. The decision was made to wait for the tide to change and touch base with us at 13:30, which was low tide. 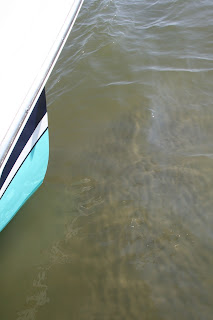 We knew at 19:30 we would be at high tide, so we decided to hang out and if there were any issues, we have the phone number of BoatUS (he had to leave and pull someone else out of the mud).

At 17:00 we have a boat that passed us and we could feel the boat had much more water under the hull as we started to rock.

At 18:00 SeaMorr drifted off the sandbar. We called BoatUS to let them know we were free, but he insisted that we stay put as he was on his way. He was there to make sure that we were able to go forward, reverse and that our steering was OK. Luckily, all was OK. 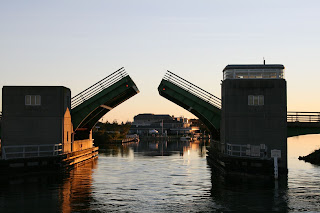 We were off and heading to Sayville to see John and AnnaCarin. We met John at a draw bridge where he got on the boat and motored with us to Sayville.....John brought Rib-eye steaks that Aaron magically cooked to perfection. 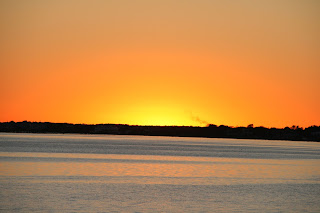 As we headed west, we had an awesome sunset. A great way to finish SeaMorr's Spa Day.
Posted by Unknown at 8:04 AM