We have been relaxing in Long Island for the last 4 days - well most of us.... Kenn went to work (who knew retirement so short lived  - but it was a worthwhile demo!!) while the rest of us seriously lounged....  We have been staying with John and AC Barry who have this amazing house right on the water.  They made us feel right at home.  Hanging out in the sun, playing with sea kayaks, exploring Long Island, and taking a day to head into NYC. Katie has developed a love-hate relationship with chickens....Might be the next addition to the Morrison cottage when we get home ! 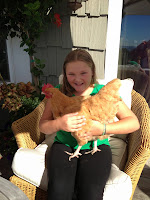 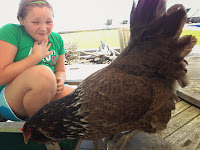 On Thursday we took the train into NYC. We wandered around Times Square, Central Park and 5th Avenue.  The carousel in Central Park was great, except Katie thought something like the seats on Leviathan would be better and the boys had a new use for the leather seat belts on the horses. 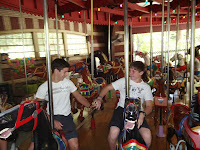 We had lunch at Trump Tower thanks to gift cards from G&G (yes we found a Starbucks there) wandered through the American Girl Store and took the NBC Studio Tour which highlighted the SNL stage and production.  We also decided to catch a Broadway show "Matilda".  Everyone really enjoyed it (even if it was a musical !!)  We took the train home that night (thankfully it was still "that night' when Corey realized he had us on the wrong train with 2 minutes to spare !!! 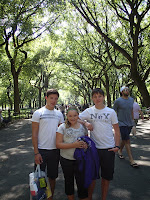 The rest of the weekend was spend exploring Long Island.  John took us in the boat across the bay to Ocean Beach - a cool cottage beach town on Fire Island where cars are almost non existent.  We ate food way "outside our usual column" including mussels, steamers, lobster and Mahi Mahi - honest - we ate food from shells, survived and truly enjoyed it!!! 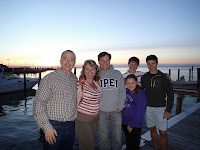 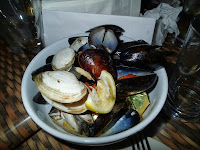 We drove around the scenic farmland and wine country of East End of Long Island on Saturday visiting very cute little towns such as Riverhead, Mattituck (amazing cheese shop on a very cute street called Love Lane), Greenport and then took a couple of ferries to get across Shelter Island to Sag Harbour. In this port they have boats large enough to carry cars on their stern decks!! We found a light house on Horton's Point we toured and happily could answer all the "aids to navigation" questions the tour guide had! 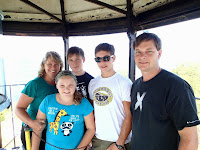 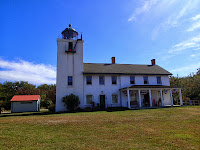 The town of Southhampton has some serious mansions to be seen, but we all decided we didn't need a huge hedge around our homes!  The whole awesome day was spent listening to the symphony of John's very intelligent, comfortable car he very nicely lent us for the day.
Posted by Unknown at 10:55 PM