Daddy, can we play 7 Wonders?

Today we had to leave Utche's marina. It will be missed. The free hotdogs were awesome. Plus the cutesy little town was nice too. But leave we had to, because the Bahamas weren't getting any closer.

I'm going to be honest, I don't entirely know what happened after we left. I slept and did homework and was completely oblivious to the world. I didn't really start paying attention again until we tried to anchor just off the channel in some river or other. Unfortunately, it was too deep, and the current was too fast, and the anchor never set, so we just went looking for a marina. 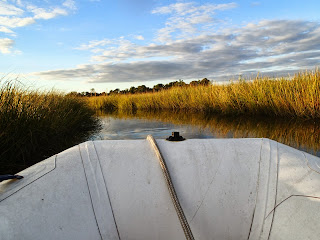 We found one. It was in the middle of a huge marsh. And there were very few boats. But there was water and power, so all was well. We even took a dingy ride to explore the marsh (there are many secret pathways just wide enough for the dingy). It was pretty fun. We had delicious pork tenderloin for dinner. Then came the 20 minutes of trying to convince dad to play a board game.

So, onboard, we have a strategy board game about collecting resources, building stuff, and getting more points than mom. It is a very fun game, but dad sucks at it. The one time he was forced to play, he lost. By a lot. Now he just refuses on the spot when asked to play. So after asking him 9 or 10 times to play, we just played hearts instead. Katie lost.

Then we fell asleep after watching a great sunset. 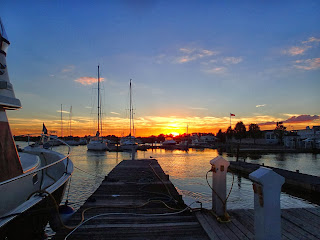