CM: Cape May by Corey Morrison

After an easy 40 mile run from Atlantic City into Cape May NJ, we planned to stay at Utsch's marina which has a very interesting approach requiring you to deviate from the channel and trust the dock hand is right, or has a TowBoat US in their marina. To cut to the chase, we made it with only some nerves being shot. The next day we rented a car and drove to Baltimore for TrawlerFest, which had lots of anticipation amongst the captain... it wasn't nearly as big as we hoped but never the less still very fun seeing as every boat was a trawler and most people were "trawler people" who understand this type of pleasure craft. Being on a trawler, we travel at about 8 knots. For those of you back in Canada, in kilometres per hour, that's roughly converts into: a really slow speed.


Luckily we have a dinghy that has a lower drag coefficient and a better power to weight ratio than Seamorr, with one person. However it isn't the same with all 5 of us... so we need more horsepower. We pulled the dingy out (used the 50,000 lb travel lift). 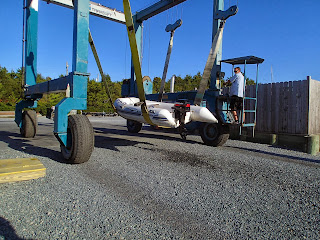 After Trawler Fest, we got more horsepower. A 25hp Yamaha will carry us all away to safety or for an afternoon of tubing (blog post coming soon). 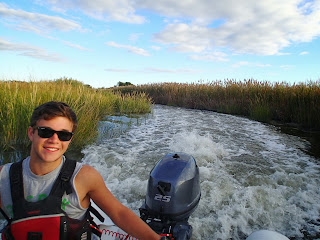