Today we were in Atlantic City. For those who have never been, picture Las Vegas. Then remove the desert. And add an ocean. And take away 90% of the people and 3/4 of the casinos. Oh yeah, and we were the 5 youngest people there. And of course add a nice boardwalk. Our day began, like all days should, with the world's greatest pancakes.

They were thin pancakes, served by a restaurant just a dinghy ride away from our marina, and they were sweet and tasted even better with blueberries and homemade maple syrup (maple syrup from Napanee, of course!). After devouring three ginormous pancakes, we went to check out Atlantic City's boardwalk.

We tried going by dinghy, but it was slow going, cramped, and rocky. We eventually turned around after being pulled over by the US coast guard who thought that we were going to brave the Atlantic ocean in an 11 foot boat. We took a jitney (public transport bus) instead. 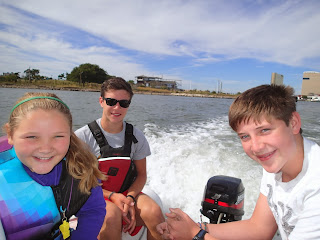 Atlantic City does have a nice boardwalk, with plenty of touristy stores, including the largest candy store I have ever seen, a Ripley's Believe It or Not tour (which Katie really really wanted to visit) and a pretty good ice cream place where they made a milkshake of any flavour which we stopped at for lunch (the mint chip milkshake is awesome by the way). We also got free tickets to a magic show from a tourist shop run by DO AC, the tourist information guys of Atlantic city. The magic show was pretty good. Magique I think it was called. Corey got called up onstage.  We found it hilarious.

After the show we headed back to the marina and went to the pool. The pool is awesome by the way, it's heated and there are deck chairs and hot tubs and it's mostly empty because it was a Wednesday afternoon, and there's a bar that you can order fries and chicken fingers from, so of course we did. After relaxing at the pool for a couple of hours we headed back to the boat, and mom and dad abandoned us again. 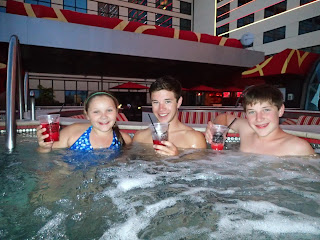 This time they were going to dinner without us, so the kids stayed on the boat and streamed movies. Then ordered room service because our marina was so fancy that you could order room service to the boat. The pizza was good. 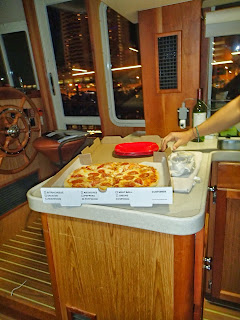 Meanwhile mom and dad won $60 at the casino. They came back and we all fell asleep.
Posted by Unknown at 11:00 AM