I made a conch horn. 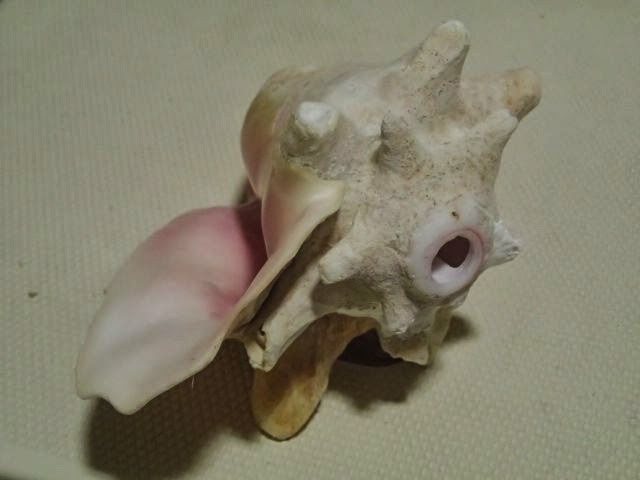 The single sentence describing a repeating event that I wanted to take part in: Every sunset, people (mainly sailboaters) blow conch horns to tell blind people that the sun is setting.

The story (which is going to be slightly longer than the last thing, because that was one sentence, and this is a whole story. Not a particularly long story, but a story all the same): for Christmas (2012, while we were still planing this trip), my grandparents (hi Grandma and Grandpa, I know you're reading this) gave me a harmonica. I'm pretty sure that it was all an elaborate plot to have my family kill me in my sleep because I would be playing a harmonica way too loud in a 150 square foot boat and they decide to murder me to get some sleep. Luckily, I am still (at exactly 8:12 on March 23rd, 2014) alive, so that has yet to happen.

So, because I wanted to be like those sailboaters and because my family hasn't killed me for playing an annoying instrument really loudly, I decided to construct a conch horn. One of the loudest, most obnoxious, most annoying instrument ever invented (I don't think things through very often).

For everyone who wants to know how one makes a conch horn (and I know that at least half of you do) I will tell you. First, find a conch shell, which really isn't that difficult.


Then, you make sure that no one is still living in said conch shell. We have made that mistake. Twice. After insuring you are in possession of an abandoned conch shell, you clean the shell until it is really nice looking.

Then, you saw the end of it off. The pointy end. This makes a mouthpiece which you then blow into, which makes a really loud noise. Do this outside. I have made that mistake. More than twice.

And then you have a conch horn.