Heading down the Potomac to Ingram Bay was supposed to be an easy run...the weather was cool, however the winds were supposed to be light (5 to 10 knots), however when we hit the Chesapeake, we found some big water and waves. The wind from the north and the Atlantic to the south had the effect of a washing machine whereby the waves were square waves - both sets of waves and wind had an effect that wasn't much fun for the three hour run down the Bay.

We made it to Ingram Bay Marina on the Chesapeake and this has to be one of the best run marina's around. From the handshake from the dock master and the help getting all rigged up for fishing, this place is awesome. The customer service is second to none. We even learned how to oyster (catch the critters) as well as popping open their shells to consume the contents, this was a great marina. 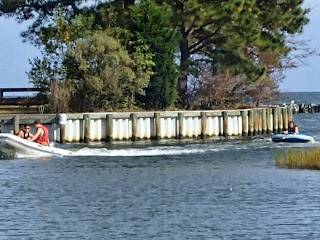 We met up with the Haas family again for lunch at a great Italian place called Anna's.  Before we pulled out of the marina, Corey & Aaron decided that we needed to tryout the new motor and the new tube (thanks WestMarine, we love you too). Sahara decided she wanted to try out the tube, so the three went out to the area just outside the marina in order to try everything out. All worked well and the tubing was a great success.

From Ingram Bay, we headed down and around to Deltaville. Deltaville marina is pretty cool where we were able to sit up in their cumfy couches and watch the movie 21. A great day just hanging out and getting caught back up on emails, ordering a new horn for the boat and find some great bagels in town.
Posted by Unknown at 8:06 PM