We pulled into Charleston Harbour (Harbor for our American friends) on Wednesday October 30th and decided we were going to stay for four days. We had an agenda and we wanted to take in everything that Charleston had available.

We hopped off the boat and met the South Carolina champion for his recent record for a Sheephead. The record was 16lbs, and our new friend caught a Sheephead that exceeded 22lbs and it was caught a day before we pulled into port. We learned how to catch the mussels, how to bait the hook and how to land a record Sheephead, however we weren't lucky in snagging a record or any fish for that matter. Here is a photo of the old record….the new record will be updated once they measure and weigh the new record.

We then decided that the best way to see the city was to take a tour in a horse-drawn carriage. As it turns out, there are five companies that provide this service and you must get on the carriage before 4pm, or you won't be able to view the 'highly recommended' residential tour. We were able to get a carriage and an awesome guide who took us throughout the residential area and explained all the different aspects of the city. We learned when the houses were built and more importantly the significance of each building. We learned that Mr. Simmons was a blacksmith and he made most of the wrought-iron fences and gates throughout the city. 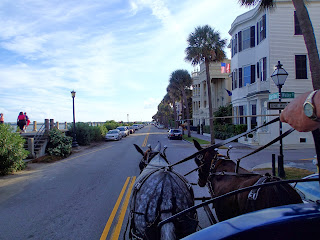 After we finished our tour, we headed over to Sticky Fingers for dinner. Aaron, our food connoisseur found the restaurant and was able to talk us into several racks of ribs….the best ribs we have ever had.
Posted by Unknown at 7:25 PM