We headed into Baltimore to stretch our legs and see the Town and we stopped in at Inner Harbor - right in the middle of the action. 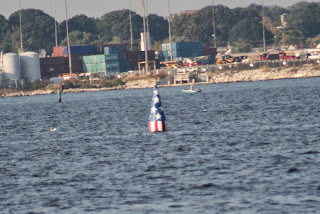 As we headed up the Chesapeake, we read some of our history and found the exact spot where the Star Spangled Banner was written. We learned that Francis Scott Key was a British prisoner and was been held on a British Ship at this exact spot and he wrote the Anthem. The British were bombing Fort McHenry and were unsuccessful in taking control of the Fort. (We could have taken the Fort easily as the Fort was closed due to Government cutbacks, so our unarmed Canadian vessel could have taken the fort whereas the strongest Navy wasn't successful in 1812!) 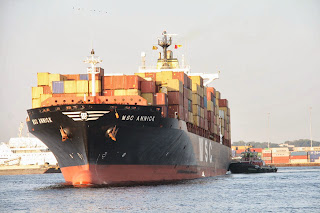 Baltimore is a major shipping port. From the time we entered the harbor until we left, there were major tankers, coming and going. We listened on VHF channel 13 to hear what tankers were going to and what large vessel was going to come out in front of us. It was great to hear the different tugs and how they were moving the vessels around.

As we entered the harbor, we were assigned our slip at the marina. After we docked, we saw 'friends of friends' who are from just north of Toronto. They are heading south on their sailboat with their two children and ending up in the Bahamas as are we. Here is their blog.... http://northernphoenix.ca/blog.php

We went to the MTOA trawlerfest - a group of mariners whose logo is a turtle. We have been members for two years and decided we would check out a talk about going to the Bahamas. The speaker had been back and forth 28 times, so we figured he would be a great guy to learn from. Great information so we are now experts on our 56 mile journey along the Gulf Stream. 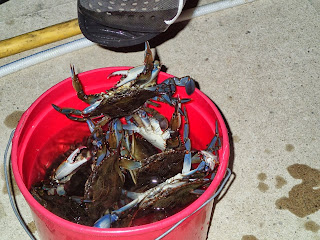 Next had dinner with Tara,  Bryan and their kids for some burgers. The kids spoke of Aaron not being able to catch any blue crabs. so with some more information and some nets, the four kids headed out on a crab-catching mission. We didn't think they would return with any crabs, however they were able to catch 16 crabs...they were all released unharmed (other than some that were missing claws, legs or other appendages). 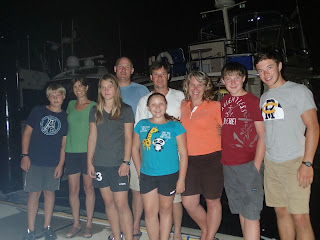 We then had our family shot to send back to Canada and decided we should check out the aquarium in the morning (Fort McHenry was closed).