Day 4 - Off to Burritts Rapids

After waking up in air conditioned comfort to birds singing, sun shining and a white bread cooking, we descended the biggest lock in the system (29 feet). We had a 17 mile & 12 lock run to Burritts Rapids. Along the way we met the Bb sisters kayaking along the Rideau in one of the locks. 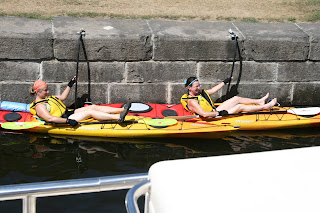 After a brief stop over in Merrickville to be a tourist attraction and order a new sump we continued along the windy river that seems more like a Disney Junglr Cruise, I was waiting to see Mickey Mouse selling $10 hot-dogs in a little stand.

Bistro Lock 17 is a nice small town restaurant, that according to Kenn sells exotic foods like "green stuff" aka salad. Kenn wasn't the only one who expanded their vocabulary, Katie learned what a shark is.

We were lucky enough to fit into a 41 foot dock space, with the help of the thrusters, it almost looks like we know what we are doing. Parks Canada was sure to collect their $9.80 for power, so we had to make the best of it, by the end of the day both air conditioners were in full power and even the ice maker was up and running.
Posted by Unknown at 10:48 PM