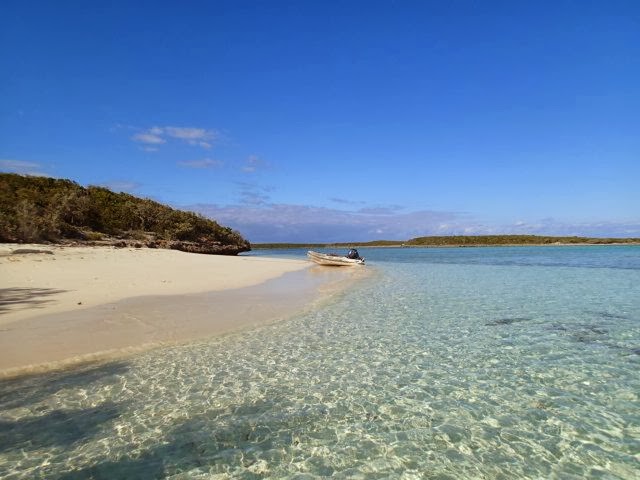 The Berry Islands lay 30 miles north of New Providence (the island Nassau is on). Most of the islands and cays have no development and are untouched, some are privately owned but you couldn't tell from any man made structures. The water is clear blue, the sunshine is warm and the anchorage is calm. We anchored in a protected bay between Devil's Cay, Hoffman's Cay and White's Cay; we joined 4 other sailboats the first night.

On Hoffman's Cay, there are a few "Blue Holes", only one of which (to my knowledge) is easily accessible. We beach the dinghy on Hoffman's Cay and walk about 10 minutes through the thick mangrove trees and other foliage along a narrow path. At the last left turn, the whole skyline opens up to reveal a massive blue hole. It's 638ft deep in the centre and must be close to a kilometre wide, in a perfect circle. There's an overhang from which you can jump 15ft down into the salty water (very salty water) and a path down underneath the overhang into a huge cave.

Here is a video (take #9 or take #10) that seemed to take more time than what it should have. Every time we moved, somehow Aaron missed the opening space where we thought he would just fit….so after many tries, we took a family shot (above).

The next day we take the dinghy down to Flo's Conch Shack- a neat little restaurant in the middle of nowhere. Unfortunately there's a miscommunication and Flo isn't there. Nevertheless, we stop at a few deserted islands on the way back to gather some firewood and driftwood (this will serve a purpose later - stay tuned). That night we have a camp fire on the beach and cook hot dogs for dinner. Not exactly Algonquin Park… but sand and salt aren't bad either.

On our last day at the anchorage, we dinghy around to the ocean side of White Cay and do some drift snorkelling. Basically you jump in the water with your snorkel stuff, but don't have to swim, the current carries you all the way down the reef where the dinghy meets you to pick you back up. Not a bad deal… There is only one little lobster found and we decided he was too small and leave him to grow larger.

The forecast calls for strong winds and waves the following morning. Not trusting the holding with our oversized anchor, we depart the anchorage and begin the journey south in search of other secluded islands and cays.