By Reading This, You have Made More Decisions Than Congress 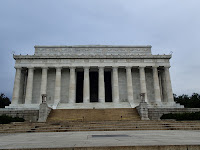 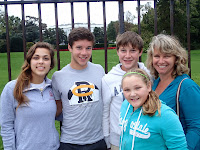 Yes, this post is about Washington. Up until St. Michael's, it had been 31 days without a drop of rain or enough overcast not to get a tan. Then it all changed, in the last week we've had an unimpaired view of the sun for a total of about 1 hour and 26 minutes and enough rain to watch a fellow boaters dinghy sink. Never the less we got our rain jackets on and prepared to keep America's economy moving. Because this week, no one else was. As a result of the government shutdown (North Korea doesn't have this problem... just throwing it out there...) none of the above tourist/historic sites were open meaning not many people were around and the rain kept away whoever pre-booked a vacation weeks ago.

There is a silver lining amongst all the storm clouds, we watched Captain Phillips (excellent movie btw), saw some local attractions (from behind security guards and locked gates), toured the Bureau of Engraving and Printing (self described as "the ones who keep America's Economy strong", printing $1 billion US dollars a day), I guess one museum had to be open... not sure how profitable it is when admission is free, but at least umbrella sales went up. We also treated our hockey addiction and went to a Capitals game.  Caps lost but the Avalnche's Canadian Coach Patrick Roy was who were were cheering for anyway !

Oh and yes, Julio (aka Julia) finally arrived in Washington after being delayed 8 hours on Air Canada, she is having a great time on the boat and now 5/6th of the crew vote for dad as a the cool parent, as he claims. It is now time to turn south and never see "N" on the compass for the next 7 months. 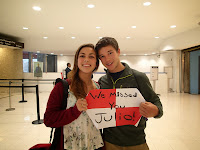