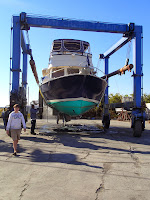 We arrived in Beaufort knowing it was a cool town, and also to get some assistance from a local marina about a vibration we had been hearing at our stern.  We decided it was a good time to haul SeaMorr out and have a look. The staff at Town Creek Marina were great.  Kenny even got a hat out of the deal and thinking positive, we didn't have to pay for dockage for 2 days! Thankfully it was a simple fix and they were able to get us back in the water quickly. It was very odd to climb up a ladder to get into the boat and not be moving at all while sleeping! 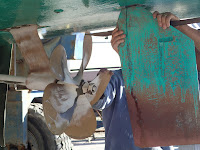 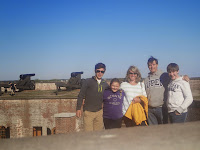 We made the most of Beaufort while SeaMorr was getting pampered.  We learned a great deal of history here (hopefully satisfying some of Aaron and Katie's educational needs).  The town played a role in the Civil war, with Fort Macon taken twice - once by each army. We toured the fort and saw a neat staircase where cannon balls had taken out parts of each step all the way down in the final battle.

We did a double decker town tour, saw a boat building shop, a maritime museum with a big exhibit dedicated to the Pirate Blackbeard and his ship the Queen Ann's Revenge which was recently found just off shore in Beaufort.  (Although I must admit Johnny Depp is a much better looking pirate) and went on the town's Haunted Walk.  For a small town it sure has a lot of ghosts walking around! 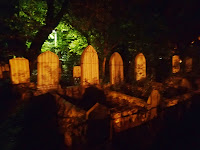 And how could I leave out - the sunsets were awesome 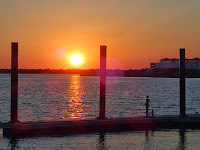