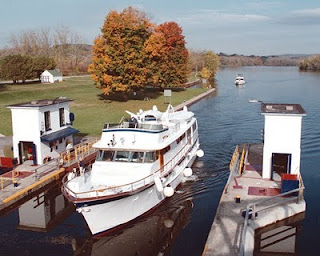 2009 and a lucky boater is going through lock 15 in the Erie Canal....it is freezing outside here today!

We are reviewing the trip along the Hudson River back to Oswego...will have to find out when the locks first official day of opening is for 2010....looks like they opened on May 1, 2009 however it doesn't look like the day for 2010 has been announced - or I just can't find it....I really wanted to count the number of sleeps before we can put SM into the water!
Posted by Unknown at 4:49 PM